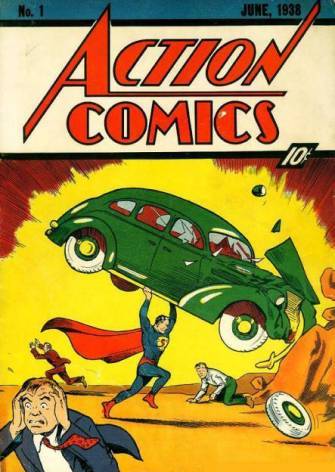 Action #1 — the birth of Superman and many lawsuits.

Superman never made any money

Saving the world from Solomon Grundy

The story of Jerry Siegel and Joe Shuster, the creators of Superman, has been in the news lately due to a big court decision. I look back on the history here.

The injustice of Superman

In 1933 two teenage boys came up with a billon-dollar idea: Superman, a character that would join the pop culture pantheon with Sherlock Holmes, Tarzan and Mickey Mouse. But instead of profiting from their brainstorm they ended up with a lifetime of legal bills, borderline poverty and soul-eating bitterness. They were two nerdy Cleveland kids, Jerry Siegel and Joe Shuster, geeks lacking in social skills and spending most of their adolescent spare time reading sci-fi pulps and comic strips. Their boyhood fantasies and reading habits led them to create the world’s most popular superhero.

They initially wanted to sell Superman as a newspaper strip but didn’t find any buyers, not surprising given their youth and the fact that America was in the midst of the Great Depression. In 1938, desperate to get their favourite idea in print, they sold the first Superman story (and arguably the rights to the character) for $130 to National Allied Publications (later known as DC Comics and now a subsidiary of Time Warner).

For most of the next 70 years, the ownership of Superman would be under intermittent legal dispute. During most of their working lives, Siegel and Shuster didn’t enjoy the fruits of their labour: they worked, off and on, as freelancers with no healthcare. By the early 1950s Shuster’s worsening eyesight prevented him from drawing, so he ended up making money as a deliveryman. In the years before his retirement, Siegel worked as a file clerk. In the spring of 1975 DC Comics promised Siegel a pension if he withdrew from a lawsuit. He did so, and then DC immediately stopped talking to him. The two men only received a pension in the end of 1975 because, in the run-up to a big-budget Superman movie, their cartoonist friends launched a publicity campaign to shame DC Comics by letting the world know that the creators of the Man of Steel were destitute.

Superman can bring justice instantly, but the courts take much longer. Last week in Los Angles, a federal judge made a major decision on this matter, granting Jerry Siegel’s heirs part ownership of the Superman copyright in the United States (the decision is likely to be appealed and the status of the claim of Joe Shuster’s estate is still unsettled).

The story of Siegel and Shuster is often presented as a morality play of innocent artists exploited by big business. There is a large element of truth to this but there’s another dimension to the story as well, about the underside of American capitalism and the relationship between real criminals and fictional crime-fighters.

The businessman to whom Siegel and Shuster sold their idea, the boss of National Allied Publications, was Harry Donenfeld, a man who bridged the divide between gangsters and popular entertainment. As cultural historian Gerard Jones notes in his 2005 book Men of Tomorrow, Donenfeld was “enmeshed in enterprises built on dirty money”, having business and social connections that overlapped with that of the legendary Mafioso Frank Costello. To understand what happened to Siegel and Shuster, you have to grasp the world Donenfeld came out of. Jones’s book about “geeks, gangsters and the birth of the comic book” is the best guide for showing the clash between the tough guy Donenfeld and the two hapless cartoonists.

2 thoughts on “Superman Never Made Any Money”