Dr. Rowan Williams, Archbishop of Canterbury: he even looks like Marx.

The current crisis is having all sorts of interesting consequences, one of which is the two leading Anglican clergymen (Dr. Rowan Williams, Archbishop of Canterbury and John Sentamu, Archbishop of York) are now echoing Marx, with special reference to the classic Marxist idea of reification (the process whereby humanly created things and institutions take on a life of their own).

END_OF_DOCUMENT_TOKEN_TO_BE_REPLACED 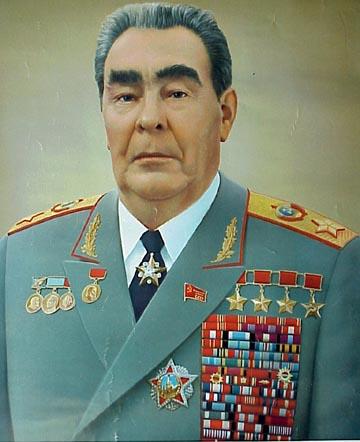 Brezhnev: Too scary to meet?

In the US presidential debate the issue came up: Should the president of the United States be willing to talk to foreign dictators like Iran’s Ahmadinejad?

The point is that throughout history, whether it be Ronald Reagan,
who wouldn’t sit down with Brezhnev, Andropov or Chernenko until
Gorbachev was ready with glasnost and perestroika.

Or whether it be Nixon’s trip to China, which was preceded by Henry
Kissinger, many times before he went. Look, I’ll sit down with
anybody, but there’s got to be pre-conditions.

What McCain said about Reagan and the Russians is not true at all. As a matter of fact Reagan was not just willing to meet with Brezhnev and company, he actually tried to arrange these meetings, but the Soviets kept putting off these requests (largely because their elderly ruling circle kept dying). And furthermore, Reagan met with Gorbachev before the policy of glasnost and perestroika were introduced.
END_OF_DOCUMENT_TOKEN_TO_BE_REPLACED

Whatever else you can say about John McCain and Sarah Palin, you have to admire their chutzpah. Indeed there entire campaign has been an extended display of sheer nerve, a willingness to say and do things that would shame normal people.

Via Washington Post, McCain’s campaign is already running ads (on the website of the Wall Street Journal) saying MCCAIN WINS DEBATE! Another ad quotes McCain’s campaign manager as saying: “McCain won the debate– hands down.” Pretty prescient since the debate, which McCain tried to postpone, hasn’t taken place yet. (See here and  here; and thanks to Laura Rozen for pointing this story out).

Speaking of chutzpah, Palin has argued that those who want to talk to Iran (i.e., former Secretary of States like Madeleine Albright, Colin Powell, Warren Christopher, James Baker, and Henry Kissinger ) are “naive.” Ah, yes, that naive Kissinger. If only he had the wiliness Palin, the Bismark of Alaska.

The Sans Everything bullpen follows no party line, often arguing amongst ourselves on the issues of the day. One topic that has been the source of much debate is the merit of the New Republic. My esteemed colleague A.M. Lamey greatly admires the New Republic as a bastion of tough-minded liberalism, always willing to challenge the pieties of the left in the name of intellectual rigour.

I, on the other hand, think that the magazine is beholden to its own peculiar set of pieties, much more noxious than anything found in conventional left-liberal thought. Since at least 1974, the dominant tone of the New Republic has been that of Ivy League debating club glibness, where arguments are valued for their surface cleverness rather than intrinsic merit. This atmosphere of boy’s club conceitedness has often been augmented by a host of unappealing attitudes: a jingoistic willingness to celebrate all of America’s war (combined with a tendency to attack as unpatriotic all those who are less willing to kill foreigners), an unqualified defense of Israel’s foreign policy often shading into anti-Arab racism, a prissy disdain for the cultural and political interests of working class Americans, a general scorn for Black and Latino culture, topped off with a complacent belief that a magazine can be pro-feminist simply by publishing a few pro-choice editorials without making any greater effort to bring in female voices. The typical New Republic writer  is a meritocratic know-it-all who thinks everyone different from him in class, cultural or gender is just an affirmative action scapegrace. (For a comprehensive critique of the magazine see Eric Alterman’s fine piece.)

END_OF_DOCUMENT_TOKEN_TO_BE_REPLACED

The United States, as you might have heard, is facing a very serious economic crisis. So serious that John McCain has said he’s suspending his campaign. So serious that McCain is trying to postpone a scheduled debate with Senator Obama.

A crucial part of the bitter debate over the solution to the economic crisis is a proposal that U.S. Treasury Secretary Henry Paulson has put forward. The proposal is not too long: about 3 pages. It’s been published in the New York Times and elsewhere. With a little bit of google searching you can easily find a copy.

Here’s the kicker: recently John McCain admitted that he hasn’t had a chance yet to read the 3 page proposal. But perhaps McCain was referring to some of the other proposals out there, like the one made by Senator Dodd. But those are also very brief and easy to find. It often seems as if McCain is not so much running for president as performing an extended national comedy routine.

In late January, 1984, Soviet-backed Afghan MiGs crossed the border into Pakistan and bombed targets in the village of Angoor Adda, killing 42 people. After another series of cross-border raids in 1987, which reportedly killed 85, State Department spokesman Charles Redman made the following statement:

These deliberate attacks are brutal attempts to force a change in Pakistan’s Afghanistan policy. They will not work. We are confident that Pakistan will continue its courageous and principled search for peace and, at the same time, to continue to offer a haven to almost three million Afghan refugees.

Let it never be said that U.S. foreign policy is uninformed by history.

END_OF_DOCUMENT_TOKEN_TO_BE_REPLACED

Lewis MacKenzie and Roméo Dallaire are both retired Canadian military generals who served in United Nations peacekeeping operations. MacKenzie was sent to Bosnia in 1992 while Dallaire was posted to Rwanda a year later. Following their UN deployments both men became active in politics, MacKenzie running as a Progressive Conservatives candidate in 1997 while Dallaire was later appointed a Liberal senator. Beyond that similarity, however, their post-UN careers have followed opposing paths. Dallaire has become the spokesman for a cause larger than himself, and has worked tirelessly to bring the issue of genocide prevention to public attention. MacKenzie, by contrast, has for years engaged in a tasteless media campaign directed against Dallaire. Now MacKenzie has appeared in the pages of Maclean’s, where, like a dog returning to its vomit, he once again revisits his sad and misguided obsession.

END_OF_DOCUMENT_TOKEN_TO_BE_REPLACED

When I wrote about Wall Street Socialism earlier this year earlier this year I little thought how far it would go. The bailout/buyout of Bear Stearns, it turns out,  wasn’t so much a solution to the current crisis as a prototype for future action. Now we have the re-nationalization of Freddie Mac and Fannie Mae, and the bailout of AIG (and can the auto industry be far behind?). No wonder  Matthew Yglesias was reminded of Lenin’s New Economic Policy in “which a market economy exists on small scales while the state controls the ‘commanding heights’ of heavy industry and finance.”

In the spirit of the new order, I thought I’d share this delightful mock-poster, which captures the mood of the moment quite well. (I haven’t been able to track down who did the image, which appears on a number of websites). Fortunately, if we need more socialist realist art (and statues of Lenin), they can still be bought at discount rates from many nations in the former Soviet Union.

Meanwhile, in other news, Obama is slated to appear on Saturday Night Live this weekend.