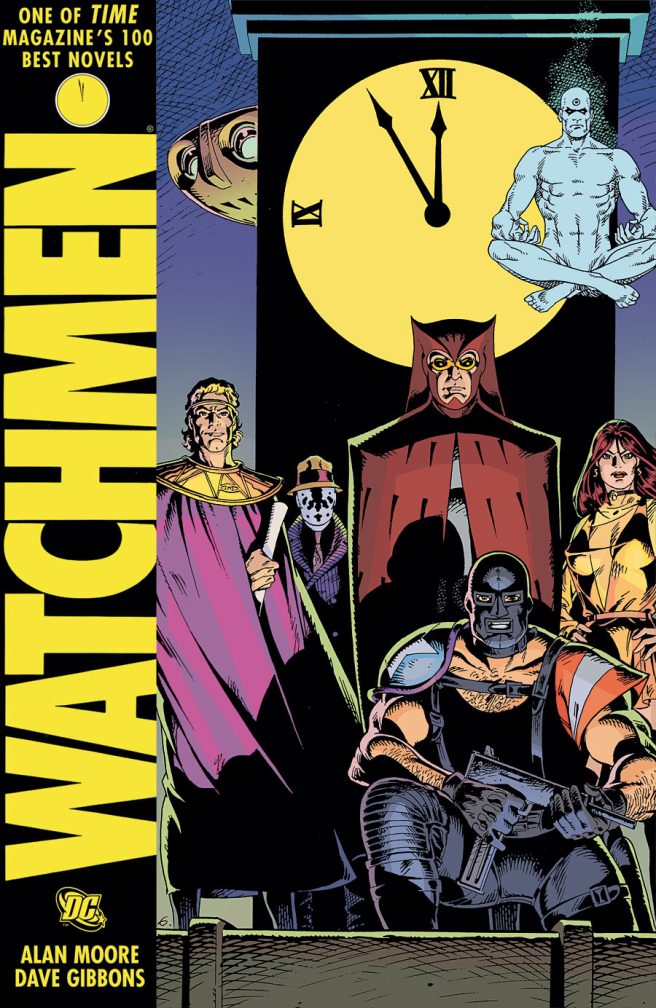 I have a confession to make. Although I’ve often written on comics, indeed have co-edited several books on comics, my bona fides as a fan can be question. You see, I’ve never really enjoyed Watchmen, the celebrated Alan Moore/Dave Gibbons graphic novel.

Although I’m happy to acknowledge that Moore and Gibbons put a lot of work and intelligence into their much-praised graphic novel, the book has always seemed like a drag to me. The problem with Watchmen can be summed up simply by describing it: it’s an attempt to write a serious superhero comic and show what superheroes would be like in the real world. The root conceptual error is that superheroes are not a serious concept. The most enjoyable superhero stories – Will Eisner’s the Spirit, Jack Cole’s Plastic Man, C.C. Beck’s Captain Marvel – are almost always humorous. They use the fantastic element of the superhero to tell lively, fairy-tale-ish, outlandish and sometimes satirical stories. Watchmen, by contrast, is all too earnest, all too glum, all too heavy-handed: it’s a comic sunk by its own dreadnought weight of seriousness.

The best review of Watchmen was written by Carter Scholz, the distinguished novelist and short stories writer, and an ideal critic for the book. Like his friend Jonathan Lethem, Scholz has tried to break down the border between genre fiction and literature, writing science fiction stories with a Kafka-like intensity. Watchmen is also an attempt at raising up genre fiction, but a faltering and flawed work.

Scholz’s review ran in the Comics Journal #119 (January 1988), and I should warn readers, who might not have read Watchmen but still want to, that it reveals a fairly important plot surprise. Here is an excerpt:

After some prodding, I’ve finally read Watchmen. It entertained me, but I’m not likely ever to re-read it.

I won’t re-read it because it’s too incestuous to repay that degree of attention. Moore has taken established comic book characters (variations on Charlton Comics characters of the 1960s), and has done his manful best to make them real people, in a realistic milieu. This, of course, is what Stan Lee was renowned for (without much justification, if you ask me), and Moore is Lee-cubed, but without Lee’s American hyperbole, optimism, and bounce. It makes for an altogether more refined performance, one which is more palatable to an adult mind, but it is essentially the same act, and I think it’s a sterile one. In same ways Moore’s approach is the weaker, and the more radical – weaker, because the super-hero genre was never made to take the strain he puts on it, and the more radical because he has taken an untenable concept absolutely as far as it can go. …

It doesn’t work because it’s all too self-referring. Moore does real lapidary work here – there are many levels of carefully-designed subtleties throughout Watchmen – but most of them turn to point directly at the deficienes of super-hero comics of the past, which maintaining as well as possible all the beloved old nonsense. We have the “world’s smartest man” (what in the name of Gardner Fox does that mean?) who has a Fortress of Solitude at the South Pole, we have aging heroes wryly aware of the sexual element to their costumes, we have a bang-up treatment of the psychotic hero gone on Ayn Rand – we have in short a brilliant doctoral dissertation on the super-hero comic. Only it isn’t a dissertation; it’s, perversely, a super-hero comic. And so we have the familiar Manichean plot, the crux of which is the fate of the world. And what a cruddy plot it turns out to be.

Tellingly, we do not have any super-villains. Moore’s sole villain is humanity. The central premise of Watchmen is more deeply misanthropic than that of X-Men. This is the hook Moore sinks deeply in all us partly-reconstructed Manicheans, and it almost works. He says: man is vile and depraved and will do himself in – so far, so good – unless the heroes step in and save him from himself. And that “unless” blows it all back to Stan Lee.

Oh, sure, the heroes fight among themselves, and there are enough subplots to keep a letterhack busy for years, but the story finally devolves on Veidt’s plan to save mankind from nuclear Armageddon by, here comes the crud, faking an alien invasion – a plot device that John W. Campbell  would have laughed out of the Astounding slush pile 40 years ago. Is this the best that the “smartest man in the world” can come up with? …

20 thoughts on “A Watchmen Dissent”