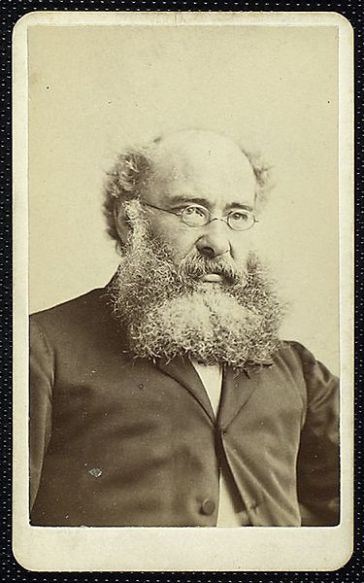 David Frum and I have had an interesting twitter debate about the merits of the Victorian novelist Anthony Trollope (you can read the dialogue here). I have a much higher regard for Trollope than Frum does and I thought it might be useful to spell out at greater than 140 character length why he’s one of my favorite novelists (and also quote some sharp critics on Trollope).

I’ve had a soft spot for Trollope ever since I started reading his novels a teenager. It’s good to start young when delving into Trollope because it takes a lifetime to survey his work. He was one of the most prolific writers of good fiction. He had 47 novels under his belt, many of them hefty tomes weighing in around the length of Bleak House, Anna Karenina or The Brothers Karamazov. As if those novels were somehow insufficient there are also five volumes of (quite excellent) short stories and miscellaneous but still voluminous books of (solid, informative) travel writing and other non-fiction (including an excellent, rewarding memoir). All of which adds not just to an oeuvre but almost a mountain range, a formidable requiring time and perseverance to conquer.

And yet despite Trollope’s copiousness I’ve never found reading him to be a chore. In fact, during one of my Trollope-binges I went through ten of his novels in a row, marveling all the while at his narrative resourcefulness, the very wide spectrum of characters he created, the psychological acuity with which these characters were presented, and the remarkable social scope of the novels (which gave the inside dope on any number of English institutions ranging from the Anglican Church, to Parliament to the financial industry to boarding schools).

Of course, even when I was most enamored with Trollope I knew he had his faults. His prose is at best serviceable in carrying his narratives forward but he was no stylist, lacking the antic theatricality of Charles Dickens or the polish of Austen. As consequence of the speed at which he wrote, he could often be verbose. He belonged to the last generation of serious British novelists not to influenced by Flaubert. In fact, the Flaubertian search for le mot juste was alien to his personality.

But despite all that Trollope has given me more pleasure than any of the classic British novelists apart from Austen and Dickens.

Trollope’s distinctive achievement can be seen in two areas, politic and gender.

1. Politics. Almost all the major works of political art deal with the extreme politics of monarchies (Shakespeare) or dictatorships (Dostoevsky, Orwell, Koestler). Trollope is almost alone in being the great bard of liberal democracy. Parliament is not just the backdrop to the Palliser novels but really their subject. Trollope delineates the workings of party politics in a liberal democracy in a way that is knowing and clear-eyed but without being cynical. He’s the classic Victorian conservative liberal or liberal conservative: the man who is trying to balance out the competing claims of tradition and reform, working to improve society without disrupting its functioning. It’s actually a bit odd that Frum is so anti-Trollope since Frum’s current project of trying to modernize conservatism seems like an eminently Trollopian enterprise.  As I suggested on twitter, Frum’s novel Patriots is very much in the tradition of the Palliser novels. (I suppose it’s also strange that I like Trollope since my politics are far to the left of the novelist’s own. But I like writers who can make me understand worldviews I don’t share).

2. Gender. Subtly related to the politics is the fact that Trollope, although occasionally lapsing into the ideological sexism of the era, constantly created forcefully female characters who are very much agents in their own destiny. Irving Howe, who didn’t much care for Trollope, noticed that in his political novels Trollope “placed, with a very warm sympathy, a number of women who display strong appetites and aptitudes for politics but, hemmed in by traditional expectations, must suffer the thwarting of their ambitions. Lady Laura Standish, Madame Max Goesler, Lady Glencora Palliser all have to accept the frustration of pretending to be docile while working behind the scenes. They love the skirmishing of political life and they spur their men to polemical sharpness; at a later historical moment they would be M.P.s or Cabinet members. In his opinions about ‘the women question’ Trollope was a blunt philistine, but in his imaginative writings he transcended his opinions.”

As far as I’m aware, no critic has written on Trollope with the appreciative gusto and crisp discrimination of Marvin Mudrick. I want to quote at length from Mudrick’s book The Man in the Machine because it gives a fair appraisal of Trollope’s merit and flaws:

Critics have a hard time with Trollope. He won’t sit still for a portrait (sometimes he looks like a minor-league Austen, sometimes like an unflashy and tough-minded Thackerary, sometimes like a cigars-and-whisky George Eliot); he is obviously an intelligent and talent writer who merits examination….

He was by temperament and talent a journeyman novelist (the term doesn’t mean “bad novelist”), he was deliberate rather than mechanical, and his novels are models of immediate unmeretricious attractiveness, credible intrigue, momentum, suspense, breath of knowledge about social and personal relations, satisfying disentanglement and resolution. He hasn’t much gift for long or climactic scenes; he would rather ruminate and sum up than dramatize; he doesn’t do low or rural characters well, and he often does them at immoderate length; he tends, especially when he grows anxious about the reader’s memory of pervious instalments, to be prolix and repetitive….

Customarily, Trollope is too prudent to be tempted by phenomena that threatens to exceed the requirements of his plots. If he weren’t also a passionate man, there wouldn’t be much else to say about the mass of his work. He prides himself on being a craftsman, what he aims at is fitness, but he is a passionate man: his job as he sees it is to keep things under control, but he starts with the handicap of having a great deal to control. Some of the fun of reading him is in looking for moods that don’t fit, feelings that get rather out of hand, surprises. For instance, he is the only Victorian novelist who gives the impression that men and women sometimes touch each other for purposes neither celestial nor infernal but simply because they like to. To be a Victorian novelist, however, is not to be in a position to take exuberant advantage of this insight, which makes itself felt as more than an ultrasonic vibration only in the guise of Trollope’s knowledgeable gallantry towards his female characters….

In another essay on Trollope, Mudrick returns to the novelist’s handling of women characters:

It’s no surprise to a reader of any Trollope novel that Trollope is fascinated by women in an altogether un-Victorian (“modern”) way: they aren’t gifts or rewards, they’re obstacles and temptations, sources of energy and centers of consciousness, sexual objects and subjects, emblems and agents of opportunity, they know perfectly well what the score is, they walk right in and take part and often take over-nobody who has read the Palliser novels would ever mistake Lady Glencora for a haze of sentiment or the resident doormat at Gatherum Castle….In other words they send Trollope up the wall, he can’t stop thinking about them, he’s always in love with several and ready for more, visions of sugarplums dance in his head, and there’s never the shadow of a doubt about what he really wants for Christmas.

Irving Howe’s essay on Trollope is from The New Republic, Feb 22, 1993. Marvin Mudrick’s writings on Trollope can be found in his book The Man in the Machine and the following issues of The Hudson Review: Autumn 1972; Winter 1983-84; Winter, 1987.

5 thoughts on “The Case for Trollope”