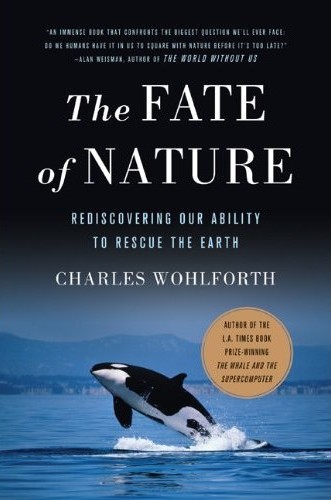 A fast heads-up that Alaska-based writer Charles Wohlforth has a new book coming out on June 8 called The Fate of Nature: Rediscovering our Ability to Rescue the Earth (you can read an excerpt here), which focuses on the relationship between the possibilities and limits of human nature, and the scale of the environmental crisis we now face. Wohlforth is a man worth following; his last book, The Whale and the Supercomputer, remains one of the best books I’ve ever read on the environment. I reviewed it for the San Francisco Chronicle back in 2004, using words that seem even more relevant amid today’s artificial tempest over the IPCC’s methodologies:

In [computer-based climate] models, the number of possible variables is near infinite, while our understanding of the natural processes underlying each variable is in its infancy at best. Meanwhile, the unrelenting logic of chaotic systems, which declares that one can’t possibly predict the future state of such a system without being impossibly accurate about its initial starting conditions, leaves science at a loss. […]

This uncertainty, of course, has spawned endless scientific and political debate about the existence and nature of climate change. But Wohlforth wisely points out that though we can’t create models that eliminate (or even reduce) the number of uncertainties, we can at least choose to “rank important certainties above trivial unknowns.” After all, we do understand the dynamics of the mechanism that causes global warming, and we do understand the importance of greenhouse gases as a determinant of our planet’s temperature, an importance second only to the sun. The global climate is like a massive machine with banks of labeled dials. We can’t know for sure what the machine will produce when all the dials are turned in different directions, but we do know that we’re deliberately cranking the second-biggest dial — the one labeled “atmospheric CO2 content” — far beyond any previous setting. And in doing so, we’re performing an irreversible experiment with the only planet we’ve got.

The Fate of Nature can of course be pre-ordered on Amazon. If I end up reviewing it for one of the tree-based papers, I’ll be sure to let you know.

This was the question explored at a recent interdisciplinary conference in Tokyo, jointly sponsored by Sophia University and the Carnegie Council for Ethics in International Affairs, where I was lucky enough to be a panelist. After the conference, James Farrer of Sophia University and Devin T. Stewart of the Carnegie Council prepared an excellent summary of what we discussed. Here it is – recommended reading for anyone interested in immigration or refugee issues.

The goal of declaring a “right to move” proved elusive at a two-day symposium onimmigration ethics at Sophia University in Tokyo, held in cooperation with the Carnegie Council for Ethics in International Affairs (Dec. 12–13, 2009). While many of the participants, and certainly both of us, started out with the hope of issuing a strong declaration on the rights of people to move across national borders, several obstacles emerged. Given that the conference was held in Tokyo, the Japanese immigration context also framed the debate.

END_OF_DOCUMENT_TOKEN_TO_BE_REPLACED

A few posts down I mention Peter Singer on egalitarianism. It must be Peter Singer week in the blogosphere, because over at his blog Philosophy Sucks!, Richard Brown also has a post quoting Singer, this time on the subject of climate change:

Yesterday LaGuardia College hosted Peter Singer who gave a short talk entitled “Climate Change and Ethics.” His basic argument was that by any reasonable standard of justice that one picks the U.S. comes out having a duty to lead the movement to reduce climate change. This is directly contrary to Bush’s stated reason for opting out of the Kyoto agreement (he said it wasn’t an ‘even-handed’ agreement because it exempted China and India . . . thereby implying that the treaty was unjust). He talked about three reasonable sounding principles of justice.

1. You break it you buy it: Historically the U.S. has been the number one contributor to greenhouse gasses and so should have the most responsiblity for cleaning up the environment

3. Benefit the least advantaged: This is the Rawlsian conception of justice according to which an inequality is acceptable only if it is to the advantage of the least advantaged member of (the global) society. This would (obviously) entail that the U.S. would have to make drastic cuts to the amount of greenhouse gasses that we contribute (per capita).

So no matter how you slice it it looks like the U.S. has a moral obligation to take the lead in reducing climate change, and yet we refuse to be a part of Kyoto because it is “unfair”!

Until recently, Australia was also a Kyoto holdout. Following the recent election however, one of the first things Kevin Rudd’s new Labour government has done is to ratify the Kyoto protocol. Let’s hope that following the U.S. election in a year’s time, we see something similar happen there.