Leave it to the excellent Douglas Wolk to remind us of one of the downsides to Osama bin Laden’s demise: that it renders moot Frank Miller’s planned Batman Versus bin Laden comic.  Although to be more accurate, Miller himself had second-thoughts about that idea and is still working on a superhero comic, sans Batman, about the “War on Terror.” Still, perhaps some other cartoonist can do an imaginary story where Batman dukes it out with Osama.

END_OF_DOCUMENT_TOKEN_TO_BE_REPLACED 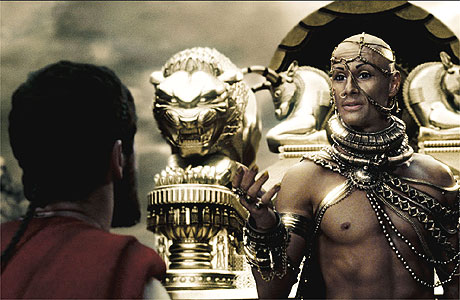 300: The Heroic West versus the Decadent East.

In the film 300, we see an absolute division between two contending armies. The Greeks (and especially the vanguard forces of the Spartans) embody everything good about humanity: they are handsome, cherish freedom, treat their women well, and have healthy loving heterosexual families (that last bit is especially risible for anyone who knows the actual history of Sparta and the surrounding Greek city-states). Opposed to the Greeks are the Persians, who are not just evil but also repositories of all sorts of unsavoury traits: many of them are deformed, all are lorded over by a tyrant, socially they are contemptuous of women and they indulge in all sorts of sexual perversions.

300, like its source material (Frank Miller’s comic book of the same name) is a work of popular entertainment and all too easy to take apart for its historical errors (University of Toronto classicist Ephraim Lytle did just that in a very funny article here). And only the ideologically blind (notably neo-con pseudo-scholar Victor Davis Hanson) have championed the comic and film as accurate guides to the past.