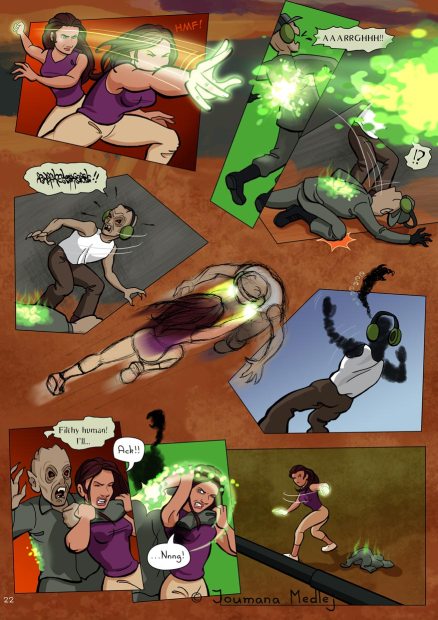 Superhero comics almost invariably have a political subtext, often involving nationalism and war. In his fledgling incarnation in the late 1930s and early 1940s, Superman stood for America, a nation weakened by the great depression (hence looking like the nebbish Clark Kent) but ready to spring forth and assume its world historical destiny. Similar nationalist allegories flowed through stories about Captain America, Wonder Woman and other early crime fighters. The heroes of the 1960s – the Fantastic Four, the Hulk, the X-men – enacted Cold War fears, often these characters were children of radiation and the atom haphazardly and uneasily using science to grapple with a changing world.

It’s not surprising the ongoing turmoil in the Middle East is producing as a side-effect many local superhero comics. The best of the lot is Joumana Medlej’s Malaak, Angel of Peace, a Lebanese superheroine who protects her ancestral city from demons bent on inciting civil strife.  Medlej has a pleasingly cartoony style, half-way between manga and the Belgian clear-line tradition. The introductory storyline nicely juggles young adult soap opera (like Spider-Man, Malaak has to balance her studies, her romantic life and her heroics) with a fantasy storyline rooted in Lebanon’s recent history of civil war. The ambiance and architecture of Lebanon is very well evoked. The spirit of the “Cedar Revolution” infuses the comic, with its suggestion that Lebanon’s turmoil is being fostered by outside forces. Interestingly, Malaak’s religious identity is deliberately obscure (it’s not even clear if she’s a Christian or a Muslim); indeed her origin has a vaguely pagan feel, sprouting as she does from the cedars that guard the city just as if she were a Greek or Roman goddess.