I’m working on an article about Dinesh D’Souza, during which I came across an old article from National Review that I thought are worth quoting. Here are some excerpts from Jeffrey Hart’s review of Jean Raspail’s novel The Camp of Saints, from National Review, September 26, 1975:

In this novel Raspail brings his reader to the surprising conclusion that killing a million or so starving refugees from India would be a supreme act of individual sanity and cultural health. Raspail is to genocide what [D.H. Lawrence] was to sex. His plot is both simple and brilliant. The time is the not-so-distant future, and the long-anticipated has come to pass. The so-called Third World is an overpopulated, disease ridden outdoor slum. In Calcutta, as if seized by a last spasm, a million starving Indians take over whatever ships are at the docks and launch forth on the high seas. It is a wretched amorphous mass, a hundred dilapidated vessels inching around the Cape at ten knots, the mob cooking rice on briquettes of human feces, copulating in all possible combinations like a Hindu frieze come to life, stinking and undlfferentiated. Gradually it becomes clear that the destination of the armada is Europe, France in fact, the Cote d’Azur. It is a “floating slum,” the “vanguard of an anti-world bent on coming in the flesh to knock, at long last, at the gates of abundance.” Other such armadas are being prepared in Asia and Africa, awaiting the French response.

But what is racism? Most people do not now and have not in the past subscribed to esoteric theories regarding the superiority of this or that race. Most people, however, are able to perceive that the “other group” looks rather different and lives rather differently from their own. Such ‘racist” or “ethnocentric” feelings are undoubtedly healthy, and involve merely a preference for one’s own culture and kind. Indeed — and Raspail hammers away at this point throughout his novel—no group can long survive unless it does “prefer itself.” One further point is implicit. The liberal rote anathema on “racism” is in effect a poisonous assault upon Western self-preference.

That Ganges anti-world slowly approaches by sea, like some viper sliding toward a bemused rodent, but the antiworld has long been at work in the bloodstream of the West. Raspail is a tremendous rhetorician, his disdain boiling from the page in a torrent reminiscent of Celine.

Two despised reactionary outposts close their gates to the Ganges horde. Australia tersely notes that the Immigration Act will be enforced. South Africa continues deflant: Q: “Are you suggesting, Mr. President, that you won’t hesitate to open fire on defenseless women and children?” A: “1 expected that question. No, of course we won’t hesitate. We’ll shoot without giving it a second thought. In this highminded raciai war, all the rage these days, nonviolence is the weapon of the masses. Violence is all the attacked minority has to flght back with. Yes, we’ll defend ourselves. And yes, we’ll use violence.” But, in Provence, only a few resist. Beau Geste-like, as the Ganges horde swarms up the beaches and takes over southern France. 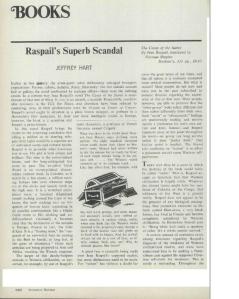